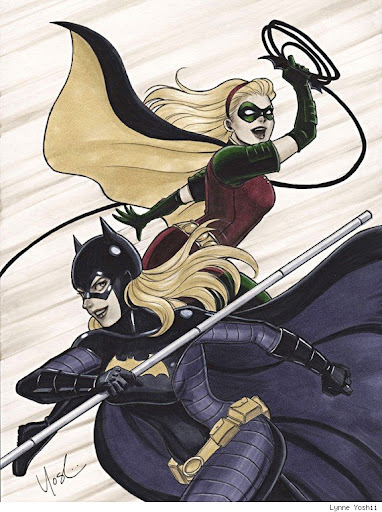 Each and every week we scour the Internet for nothing but the best in nerd based art. We leave no digital stone unturned, we poke and prod every net based nook and cranny. Why? Because we love you, and we love to bring you weekly Nerd Art Dumps.

Na na na na na na na na, Batgirls! – Well, one Batgirl and a Robin anyways, but a single Stephanie Brown. We here at Nerd Bastards HQ love the work of Lynne Yoshii, having featured her here several times before, but featuring the former Spoiler turned third Batgirl with her past self is pretty damn cool. When your originally a three-issue deal and you become one of the biggest female characters in comics you know your doing something right. [Comics Alliance]

Hit the jump for Spider-Man, Ginny Weasley and MOAR! 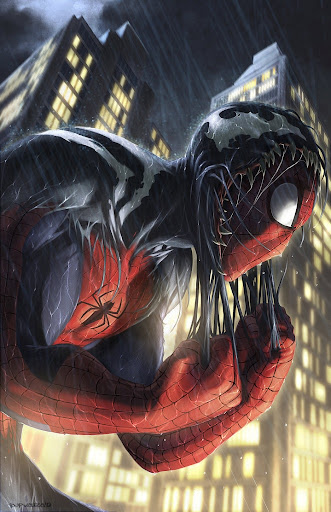 Venom is a dick. Just look at the drawing by totmoartsstudio2 and you’ll see what we mean. All Spider-Man wants is some time alone to himself but Venom just doesn’t know when to let go. Guess “symbiote” synonymous with jerk. [Deviant Art] 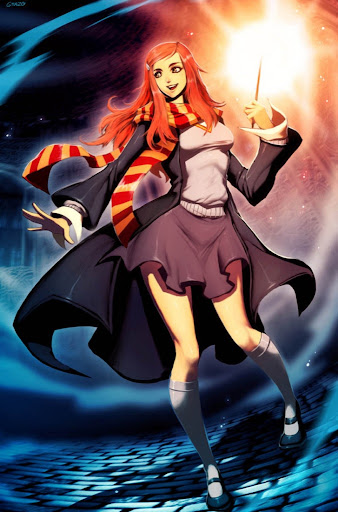 Whoever said “magic isn’t sexy” obviously never saw what deviant artist Genzoman did with Harry Potter‘s Ginny Weasley. You can’t say we’re being dirty though, as we are basing this claim -and crossing our finger – on the fact that this Weasley is 18 at the time. Hell, Bonnie Wright, the actress who played Ginny was born in 1991 and that makes her 21 now, so any future comments we make are totally fair. [Deviant Art] 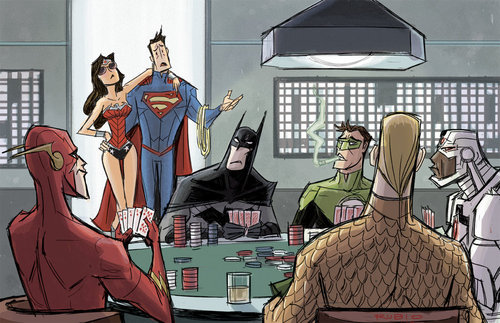 That awkward moment when you have to tell the rest of the team. [Comic Cool] 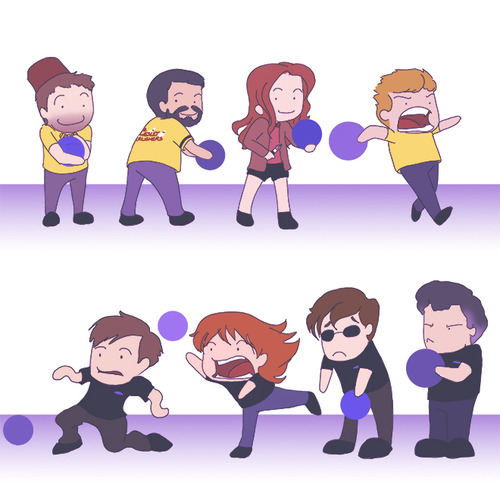 The legendary Nerdist‘s All-star Celebrity Bowling game – Team Nerdist vs. Team Doctor Who. Yes, Chris Hardwick and his band of Nerds against Matt Smith, Karen Gillan, Arthur Darvill and Steven Moffat as rendered by Namberjams. Extra points for having Wil Wheaton‘s “Wesley Crushers” on the back of his uniform. That’s dedication. [NAMBERJAMS] 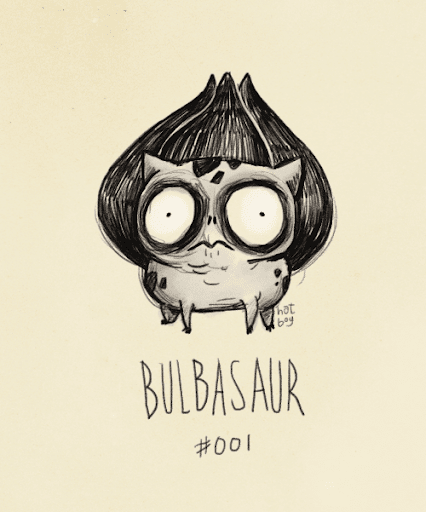 Bulbasuar might look like he’s a bit too much weed killer, but this is actually the first in a long line of redesigns by Vaughn Pinpin. Pinpin plans on styling every first generation Pokemon in the style of a Tim Burton character. ‘Cause… you known, we all wondered what that would look like. [Kotaku] 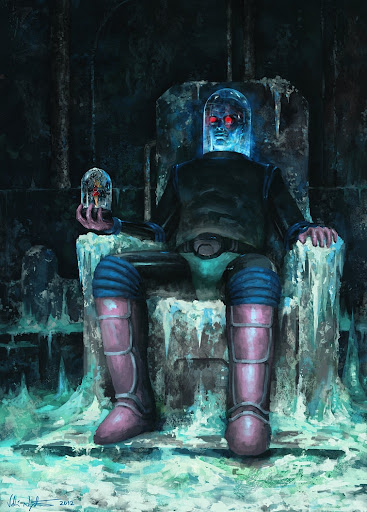 One of the most underrated villains in the DC universe, Mr. Freeze is one of the few who actually didn’t become evil for the sake of evil, he did it to save his frozen wife. Still doesn’t mean he can’t have one bad ass stare in the hands of Vablo, who crafted this cold hearted stare for the man of ice. [Deviant Art] 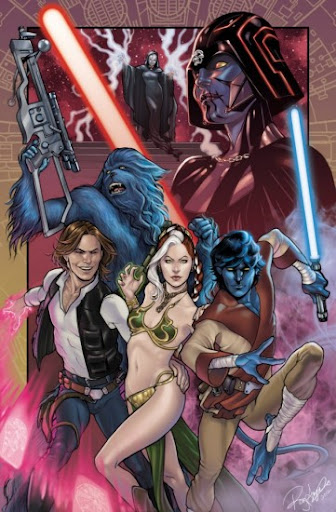 A long time ago, in a galaxy far, far away, Star Wars was mixed with the X-men thanks to the twisted, but brilliant mind of Arzeno. Gambit as Han, Rogue as Leia, Beast is freaking Chewbacca for crying out loud! [The Mary Sue] 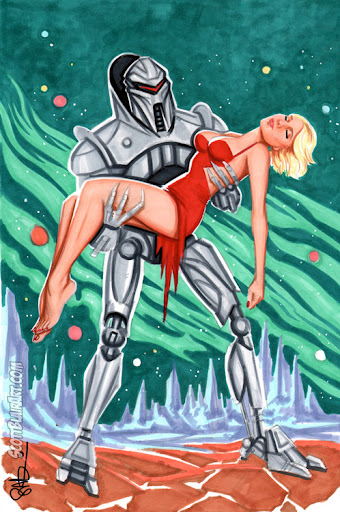 Oh no! It’s a monster, holding another monster, but Scott Blair makes both Cylon and Number 6 look perfect for the monster/damsel in distress part. If we didn’t know she was a heartless killing machine we might feel bad. [Scott Blair] 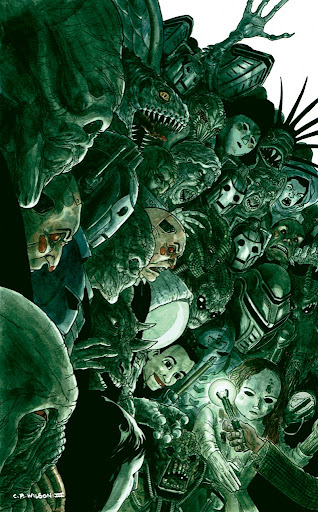 Some villains are scary, but what the BBC has been able to do with the villains of Doctor Who makes them absolutely terrifying. So when Ultimate Comics’ releases their new IDW series Doctor Who Carnival of Monsters they called upon cpwilsoniii to do this kick ass variant cover. Featuring several of the Doctor’s past and present foes, this cover could one day be a part of your collection, but keep a companion beside you just in case. [GeekTyrant] 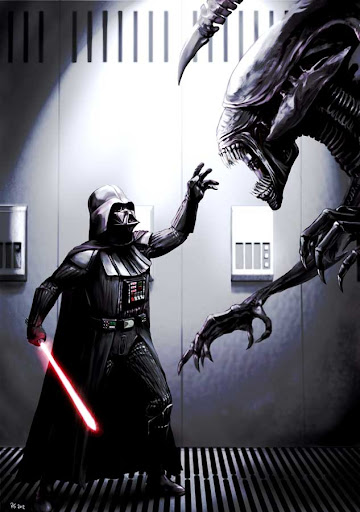 Robert Shane put together this kick ass “what if” scenario of Darth Vader encountering an Alien queen. I’m putting my money on the shiny black one. [LAZORZ]