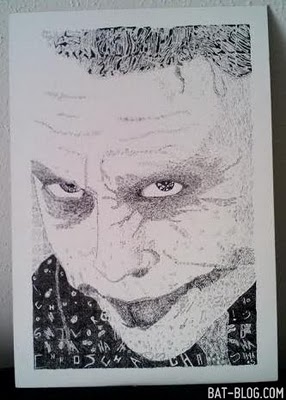 This drawing was sent in by a loyal Bat-Blog Reader named Kanike. She is totally obsessed with the Joker character! She loves all the different versions of the Joker from the comic books, animated cartoons, video games, movies, etc…In fact she has even started a blog about it called RANCID RAINBOW. Anyways, here’s a drawing she recently did of the Joker from the Dark Knight Batman movie. Of course it’s the Heath Ledger version & it looks just like him. Now, overall the picture is really excellent but the neat clever thing is that the lines are mostly made-up of small words. From far away it looks like a graphic but if you look at it very close-up you’ll see that they’re words like “Ha Ha Ha!”. For example, look at Joker’s eyes…they’re made with the words “Anarchy & Chaos”, very cool! Now, I did mention her blog, which is all about the Prince of Crime. Here’s a link to check it out, just click HERE!